I am pleased to host C. S. Boyack on today’s edition of Fantasy Authors Unplugged. He has a new book out named Yak Guy which I’m thoroughly enjoying. I turn it over to Craig. 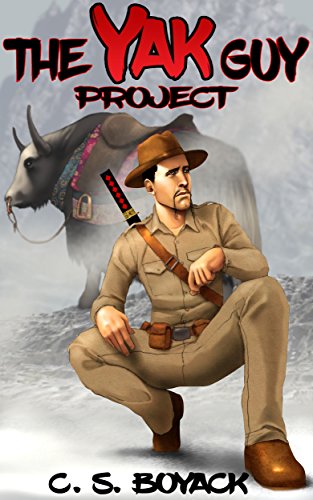 Thanks for having me over today to talk about my newest book, The Yak Guy Project. This is an alternate world kind of story about a spoiled and dysfunctional young man who gets placed in an environment where nobody is going to put up with his crap.

As a fantasy author, I thought P.H. Might appreciate a small part of the world building in this story.

Part of the world building here is the warring factions. Yak Guy starts off in the wilderness, and has to pick up some basic survival skill, and fast. Fortunately, he has a guide in the form of a talking yak.

Once Yak Guy learns to take care of himself, the yak offers to take him to one faction or the other. The choice is his, but it’s irreversible.

He soon learns the people have been at war here for hundreds of years. Finding a way of portraying that was part of the fun in writing this story. They destroyed everything, and are back to fighting with spears and swords. Yet there is evidence of what they lost in the form of debris from ancient battlefields in the wilderness. He even finds one silk painting of a squadron of jet fighters still hanging in the home of the city’s most prominent person.

The population here is primarily Asian, but there are other races all over the place. This was my way of indicating that mass transportation existed before these people destroyed themselves.

I know languages started and localized based upon physical barriers, like mountain ranges and oceans. What would hundreds of years do to what used to be a common language? The opposing faction in this story speaks a language we can vaguely understand. It’s one of my hints that everyone used to be a common community here.

As part of his growth, Yak Guy is helped out by a friendly Hermit. This fellow speaks a language he can vaguely understand. He comes to realize that the little people are still people. Wars are waged on a higher level, and it’s the little people who pay.

There are many lessons ahead for Yak Guy, and it’s sprinkled with enough sword fights, predatory lions, and pretty girls to keep it interesting.

I hope I’ve convinced you to take this journey with my Yak Guy.

Imagine waking up in the desert with no idea what happened to you. You have clear memories of situations and places, but a complete loss in personal matters… like your own name. This situation is bad, and you have no idea how to get home.

When you’re rescued by a talking yak, the situation gets exponentially worse. You’ve obviously lost your mind. The immediate needs of a ride off the salt pan and searing heat, along with a drink of water, outweigh the concerns about your mental state.

This is exactly what happened to the Yak Guy. In fact he’s been placed in an alternate world and given a chance to start over in life.

Can this selfish, almost parasitic, young man learn to start over in a world where charity is hard to find? Life is brutal and short here, but he’s going to have to adapt or perish.

The Yak Guy project is loosely based around The Fool’s Journey from the Tarot. Those with experience in Tarot will spot people and situations from the Major Arcana.

Talking Yak? You bet and much more. Give this book a try and I think you’ll enjoy it – I know I have! Thanks to Craig for being on the blog today and best wishes with the new book.