It’s audio release day for An Arrow Against the Wind and I thought I would re-live the beginnings of the book with some development history involving the series. The Bow of Hart Saga began decades ago as an effort entitled, An Arrow Into the Wind, which was completed back in the early 1990’s – yes a long time ago. That original effort contained elements of mostly what would become The Bow of Destiny as well as part of An Arrow Against the Wind.

After I completed that initial project, I did what all would-be authors do and submitted it to many publishers. I scoured available resources at the time and made lists, then sent the paper manuscript out for what seemed like countless times. Eventually, the trail of rejections ended with a contract offer from a small press. A lawyer in the family went over that contract and left a lot of red marks throughout that non-negotiable document. I eventually backed away, feeling that the contract was not for me.

Over the next decade plus, I made attempts to re-boot the series, always with the feeling I had made a bad decision about the small press contract. I guilt-tripped myself into feeling that publication somewhere was better than nowhere. The series languished in storage and the back of my mind until I felt a strong urge to go back to writing once again, just after all the online self-publishing boom began. I started several new projects but decided that my former book needed to be addressed, my reasoning being that it had garnered a contract offer and it needed a shot. Cutting my teeth on the book/series seemed like the best option.

I immediately realized that the entire book needed re-writing and my first painful decision was to split it into two books which led to the first title being The Bow of Destiny. Re-writing meant updating the entire style, plot, characters, voice and, eventually, technique. The writing was too distant so it needed an injection of deep point-of-view. Re-writing The Bow of Destiny took years of work and learning more than I ever knew previously but I finally published it in late 2015.

The Bow of Hart Prequel Pack released as a free audiobook in September 2018 and contains both free series prequels, Trading Knives and What Is Needed.

The Bow of Destiny languished in the self-published ghetto of forgotten books for months to my discouragement but not to my surprise. During that time, instead of working on the next book, I worked on several projects with my employer and helping my daughter get into college. Once those projects ended in the spring of 2016, I drifted back to writing, this time determined to market The Bow of Destiny. By the Christmas season of 2016, the book was selling extremely well, eventually landing in the top 20 of all of epic fantasy on Amazon – right up there with the big-name authors. That was both exciting and unnerving. I couldn’t believe what happened.

That sales burst led to several contract offers, one of which was for audio. Life and the holidays were so busy, I ignored the message in my inbox with the thought it was from some vanity publisher which I’d have to pay tons of money for audio publication. I planned to get to it later but never did for months.

In early 2017, I started working more on An Arrow Against the Wind while I talked with an agent about contract offers. Then a layoff hit where I worked and sent me into unemployment for the next eleven months. While I looked for a new job, I worked on writing. An Arrow Against the Wind proved difficult since it required me to stitch together old content (it had been split from the original work) with new content. The process was nerve-wracking since I was out of work and felt pressured to get something new published. I rushed and, with the help of my editor, got the book released at the tail-end of April. The book sold very well and got even higher ratings than the first book.

The Bow of Destiny released in September 2018 on Audible with the incredible voice-acting of Tim Bruce.

Several months later, a conversation led me back to that email swimming around in my inbox. It turned out I had the audio contract offer for about nine months! I contacted Podium and we started a dialogue about publication and I was surprised to learn the company basically discovered The Martian. After months of discussion, I was pleased to sign with Podium Publishing back in March of this year after which production efforts started. The first results were The Bow of Hart Prequel Pack on AudFans, then The Bow of Hart on Audible last month. Today, that process continues with the release of An Arrow Against the Wind on Audible.

The narration is fantastic as is the cover. This is an exciting season for me with the audio releases and will continue into next month with the release of The White Arrow on 11/27/18. But today is all about the second book, the one with the title so similar to the original title. An Arrow Against the Wind bridges the initial work of the series with the newest content but it’s far from a patch-job, having been named as the 2017 Book of the Year by Fantasia Reviews (following in the footsteps of The Bow of Destiny in 2016 by the same review site).

Without further delay, here’s the blurb for those who have not seen it:

This unique epic fantasy will keep you turning pages as Athson and company are drawn deeper into the intrigues surrounding the Bow of Hart.

Pick up the second book of The Bow of Hart Saga because the adventure spins like an arrow in flight.

Find it on Audible! 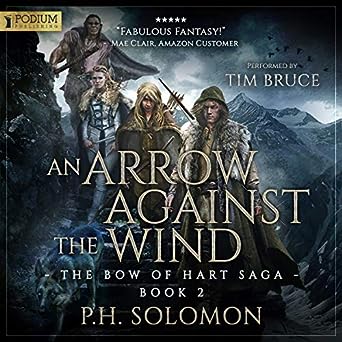