Good morning everyone! During the paperback release of The White Arrow on Monday, I hinted at some further announcements for some of my books. Today is a good time to circle back to that topic. Also, last week, I visited several ideas to increase the number of formats regarding my writing catalog. 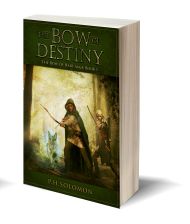 Most Indie authors don’t work that much beyond publishing ebook and paperbacks. More are getting into audio books each month since that’s a good market for authors. I’ve been fortunate to have The Bow of Hart Saga under contract with a traditional audio publisher. But

most don’t have the time or money to do more than these kinds of publication. With all three of books of The Bow of Hart Saga now in paperback and The Order of the Dark Rose soon to be released in print too, I’m moving ahead with an additional format.

Beginning this month, The Bow of Hart Saga will become available in hardcover. The Bow of Destiny should be available by the end of the month. An Arrow Against the Wind will arrive in hardcover during April. The White Arrow will be published in this format in May.

Likewise, The Order of the Dark Rose is coming to paperback and print very soon too, perhaps as soon as the end of the month as well. Paperback was in the plan for the original release but illness prevented that from happening. Now, it will arrive with paperback and hardcover. Audio is still on the table for this book too, but there’s some work that needs to be done on it to get that far so it may take a while, but no rush on that point.

The overall goal is to provide readers with purchasing options based on their reading tastes. I’m pleased to offer these choices. There are further goals to push the books into some other venues for more availability. Many indie authors don’t try for distribution to bookstores and libraries, however, I’m investigating ways to provide print to shoppers and borrowers. This plan is still in the works so I’ll announce more about this development when I know more.

For now, I’m pleased to announce the upcoming hardcover releases. It’s another step forward for me as an independent author. Moving forward, I expect new titles to be released later in the year, starting in just a couple of months and the plan is to release them in ebook, paperback, and hardcover on the same day. That’s much different for me but a positive development.

Thanks for stopping by the site today. I hope you have a great day. Please share this post anywhere you wish and leave your thoughts in the comments section and I’ll reply as soon as I can.

Meanwhile, have a look at The Order of the Dark Rose, Volume 1 of The Cursed Mage Case Files:

An arch-mage can handle almost anything. Unless he’s cursed, lost his job and facing an unknown enemy.

The Gallantean Empire relies increasingly upon magical technology which cleans sewers, runs trams and much more. Within the capital city of Cal Rindon, magic is pervasive, but not necessarily used without criminal activity. The bustling metropolis boasts constant innovations mixed with growing pains. Amid the good lurks the bad with unrest and growing crime.

Arch-mage Manny Mandeheim fell under a curse, watched his fiancé die, and then lost his job as a spy. So what’s an arch-mage to do? Start his own magical investigation service while he works to clear his good name and maybe avenge his lost love. With his very un-magical partner, Wish Ackford, Manny discovers the menace of a much larger conspiracy than he expected looming behind his curse. The limitations from the hex leave him at a distinct disadvantage as he and Wish investigate.

Assassins lurk at every corner or in every tram car. The threat of an unknown mastermind with murky intentions lingers just out of sight. A questionable source offers the hint of a secret order hounding Manny’s footsteps. A murder leads to wrenching discoveries.

Nothing an arch-mage can’t handle…

Unless the curse limits how much magic he can use or kills him outright.

A mixture of gaslamp fantasy and Sherlock Holmes-like cases, The Order of the Dark Rose is a sleuth private detective mystery set in an alternate fantasy world where magic is both commonplace and dangerous. Mysteries abound in this original, new fantasy from P. H. Solomon, author of the award-winning, best-selling epic fantasy series, The Bow of Hart Saga.

Can Manny survive long enough to break his curse? Or will the arch-mage’s hidden foe escape him?

U. S. author, P. H. Solomon grew up with a love of books including fantasy. Always interested in odd details, history and the world around him, P. H. has found an outlet in writing where he mixes a wide range of interests from the regular world, history and anthropology into his fantasy books.

His epic fantasy series, The Bow of Hart Saga, brought a fresh viewpoint to the genre where magic, myth and mysticism mingle. Described by readers as a “mixture of the classic fantasy past with new ideas.”

The latest series, The Cursed Mage Case Files is a mash-up of classic Sherlock Holmes, The Dresden Files and Harry Potter into a unique fantasy world where magic is both an arcane practice and a technological power to be harnessed. Join Mandlefred Mandeheim and Wishton Ackford as they team up to investigate magical mysteries.

Find more about P. H. Solomon as well as articles and research notes, plus a free stories, at https://www.PHSolomon.com