This is continuing feature on Archer’s Aim – Fantasy Authors Unplugged. I hope to frequently share an interview with a fantasy author. If you have authors to suggest and/or questions you’d like to see answered then leave a comment or send me an email. If you are a fantasy author and would like an interview please let me know and we’ll plan one that fits your schedule. Today I welcome Emory Skwara to Archer’s Aim to share about his recent book release.

1. What’s the title and plot of your new novel?

My novel is called Of Song and Singularity. It’s about Wrenna Sunden, a teenage girl who lives in a futuristic utopia governed by a synthetically intelligent being named Sophia. Wrenna doesn’t know hunger or fear, and like the rest of the civilians in the utopia, she lives in luxury. However, all that changes when Sophia institutes the Exodus Act, a relocation program to a newer, better utopia. But nothing is what it seems, and Wrenna’s father isn’t convinced by Sophia’s intentions. In a last ditch effort; Wrenna’s father saves her from the Eos, Sophia’s retrieval units, forcing Wrenna to choose between trusting him or Sophia. At the heart of it, it’s a family story of survival under severe and terrifying circumstances.

2. How did you decide to write a science fiction?

I’ve loved science fiction since I was a little kid. The first science fiction story I can remember is when my dad introduced me to Star Trek: The Next Generation. I think it was Star Wars, though, that truly inspired my imagination and made me love the genre. So, I’ve been writing science fiction stories since high school, but all short stories. After completely my first novel, which was a fantasy, I thought it was time to switch over to science fiction and take a crack at it.

3.What’s has been your approach to promotion with this book?

I’ve just been trying to spread the word through various social networks like Twitter, Facebook, and Wattpad, and through my website and newsletter. During my pre-order period on Amazon, I ran a successful Headtalker campaign that reached over 304% support, which was a great way to spread the word of mouth.

4.What special research did you do for your new book?

Most of my research centered on artificial intelligence, synthetic intelligence, and the idea of a singularity. There’s a lot of great information on what we know now about the technology, but also of computer scientists and futurists who predict what AI might look like in the future. Some of it is pessimistic, saying that AI will make humans essentially go obsolete. I tried to take the opposite approach and ask the question, “What if AI was the first step toward utopia for humanity, but somewhere down the line it goes wrong?” I tried to research what that might look like, but also used my imagination and creativity as well.

5.If you could go anywhere in the world, where would you like to go and why?

Tough question. I’ve always been fascinated by British History and Literature. I studied it a lot in college and would like to see a lot of landmarks there. So, probably would want to visit the United Kingdom. I could totally see myself spending months hanging out at pubs and sightseeing.

6.Let’s flip that – what fantasy world would you like to visit?

Well, I definitely wouldn’t want to visit Westeros! I think I’d like to visit Middle-Earth. Who wouldn’t? What a beautifully descriptive world Tolkien created with so many great places to visit.

7.Who did the artwork on your latest book?

Well, originally I designed two covers and had my readers vote on the one they liked the most. I used the one they liked for a little while. However, I’ve been getting requests for a paperback copy, so I decided to shake things up and hire a graphic designer online named Jesh to create both the ebook and paperback cover.

8.Describe your journey as a writer.

It started with an old laptop my friend loaned me. I was inspired to write a story and I took a crack at it. I’ve been writing ever since, taking creative writing classes, publishing poetry in my high school literary magazine, stuff like that, but it wasn’t until after college that I decided it was something I wanted to pursue as a life ambition. I remember in college I was just bursting with story ideas and imagined a lot of them while I did grunt jobs like mowing lawns or cleaning dorm rooms. I still keep thinking up tons of new ideas and can’t stop them from coming. I probably average one story idea every other day. I love language. I love art. I love the process of creating worlds, stories, and characters. So, yeah, I took all that as a sign that I was meant to be a writer. I published my first novel Numinous last year. It was chosen as a Wattpad Featured Book of 2014. I also had the privilege of attending the AWP Writers Conference in Minneapolis this spring, selling copies of my book and meeting a lot of great writers. Currently, I’ve written and published two novels and one novelette, plus several short stories. I’m currently journaling about my journey on my newsletter while I draft my third novel titled Gùltha. It’s also the sequel to Numinous and the second novel in my fantasy series A Dirge of Rood’ravil. It’s quite the journey!

Of Song and Singularity Blurb

Wrenna Sunden lives in the utopian world of Avalon, under the care and protection of Sophia, a personal, synthetically intelligent being that governs everything, creating harmony and peace. Since she was a child, Wrenna was without want, getting all her heart desired, but her lavish lifestyle is stripped away when Sophia institutes the Exodus Act, a relocation program to a new, better utopia enacted by mechanized retrieval units. Wrenna puts her trust in Sophia, but when her father isn’t convinced the Exodus Act is what Sophia says, he wants Wrenna to escape. Wrenna must choose between her father and Sophia. On one surprising day, she is thrust into a decision that will change her fate forever and send her down spiraling into a world of survival. Wrenna must come to grips with her new reality, fight to survive, and somehow find out what happened on that fateful day. 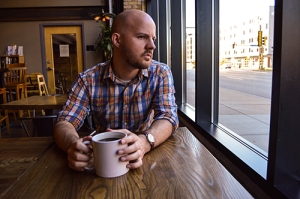 Emory Skwara is an author of fantasy, science fiction, horror, and general fiction. He has published work on the Burnside Writers Collective and is a Wattpad Featured Author. His debut novel Numinous was also a Wattpad Featured Novel of 2014. He loves to explore character dynamics, dialogue, philosophy, and moral dilemmas within his stories. He started writing when a friend lent him an old laptop in high school and decided to write a science fiction short story. From there he never looked back and has worked to master his craft. After receiving his Bachelors in Liberal Arts, he took up the pen and drafted his first novel Numinous which he published in September of 2014. Other than writing, he loves to read, collect vinyl, and play with his kids. He resides in Minnesota with his two children.

Thanks to Emory for sharing his new book, Of Song and Singularity. Please take a few moments and check it out on Amazon. If you’re a fantasy author and would like to be interviewed for “Fantasy Authors Unplugged” just contact me via email or one of my social media channels and we’ll set one up.

Please share your thoughts and ideas in the comments section. Sign up for my Archer’s Aim Digest mailing list to receive the forthcoming edition of my newsletter with announcements about upcoming releases and events. You’ll receive my a FREE coupon for my short story e-book, The Black Bag which contains a sample chapter of The Bow of Destiny. You’ll also be the first to have news about my books, especially some free offers this summer related to the upcoming release of The Bow of Destiny, the first novel of The Bow of Hart Saga. Speaking of which, it is now available for pre-release orders on Barnes & Noble, Kobo, iBooks (via the iTunes app) & NOW Amazon – Kindle. Additionally, September’s FREE book, What Is Needed is available at Barnes & Noble, Kobo, iBooks and Smashwords & Amazon.