The Bow of Destiny 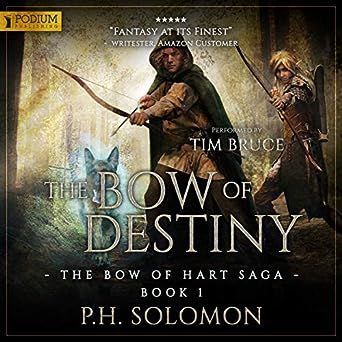 The Bow of Destiny e-book is on sale for 99 cents.

Listen to the audio version with Amazon’s Whispersync.

The Bow of Destiny was awarded 2016 Book of the Year by Fantasia Reviews!

The Bow of Destiny is an epic fantasy has been well received with glowing reviews from fantasy sources as Fantasia Reviews. It’s sold over 8,000 copies to date and continues to have strong sales with enthusiastic responses.

What’s the book about? Here’s the blurb and responses from readers:

“…one can almost see the trail, and fear the trolls.” – Victor
” the characters are still dancing around in my head, the sign of a fantastic journey.” – MC
“Solomon has his own signature touch that gives us not only something original and unique but will leave many fantasy readers waiting for more.” – Fantasia Reviews, 2016 Book of the Year

Haunted by his past.
Hunted in the present.
Uncertain what is real.

Athson has seen things that aren’t there and suffered fits since being tragically orphaned as a child at the hands of trolls and Corgren the mage.

Where to Find the Book:

News About the Book:

The Bow of Destiny, while growing in popularity in it’s current e-book format is not yet scheduled for print. However, there are plans to move to the print format as soon as possible. While I’ve been exploring how to approach a print version, I have been playing around with the full cover that I hope to share here within a few days.

In other news, I’ve received an offer for an international digital opportunity. I’m exploring this offer at this time and may well announce an agreement going forward at some point in the near future.

I’m also working on several appearances on a variety of blogs so check back for more information later.

I’ll also soon have a full cover for print ready to share here!

I just found out that The Bow of Destiny is on the short list for Book of the Year over at Fantasia Reviews!

More About the Book:

Limbreth is a pretty cool character from the series. Here’s an interesting post about her. She was even interviewed on C. S. Boyack’s Lisa Burton Radio!

I get a lot of remarks about Spark. Want to know a few secrets about Athson’s invisible pet? Read more here!

Fantasia Reviews posted a glowing review of The Bow of Destiny back in September of 2016.

I did a few interviews last year when the book was released: Beyond the Cover, Speculative Fiction Cantina and Tell Me a Story.