I’m often searching for a new book to read as soon as I finish one. I’m between books at the moment and I’m looking at this series. I must say there are several authors I need to read and Raymond Feist is one of them. This series is going on the TBR.

Waiting on Wednesday is a meme I’ve participated in for years which lets readers share their excitement for books coming out soon, and this week my pick is for a series which I’ve been enjoying for the last few years.  Anyway, the novel I’m eagerly awaiting is . . . 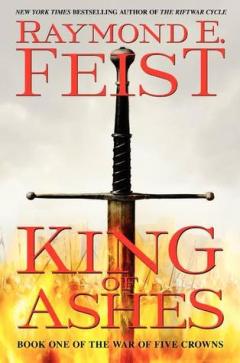 For centuries, the five greatest kingdoms of North and South Tembria, twin continents on the world of Garn, have coexisted in peace. But the balance of power is destroyed when four of the kingdoms violate an ancient covenant and betray the fifth: Ithrace, the Kingdom of Flames, ruled by Steveren Langene, known as “the Firemane” for his brilliant red hair. As war engulfs the world, Ithrace is destroyed and the Greater Realms…