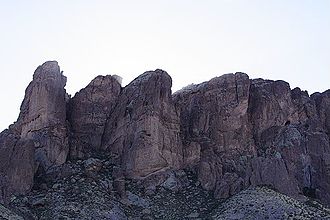 It’s the stuff that makes for a great story and grabs people’s attention who enjoy one: The Lost Dutchman’s Gold Mine. The stories about the fabled mine in Arizona’s Superstition Mountains has fascinated any number of people and inspired as many as 8,000 people a year to go looking for it. Everyone thinks they will be the one to find it. Some people have died looking for it, even in recent years. The mystery and danger keep people fascinated as well as the promise of riches and fame.

The story has dubious beginnings, none of which seem to play out to anything substantive. It’s named after a German (“Dutchman”) named Jacob Waltz who supposedly worked the mine and was found dead in the mountains or thereabout. Since then, rumor has led many people to look for it, some of whom wound up dead in mysterious circumstance – seemingly. There are…