Find out more about Voyage of the Lanternfish by C. S. Boyack…

An honorable man is mistaken for his disreputable father. Now he’s pushed into a 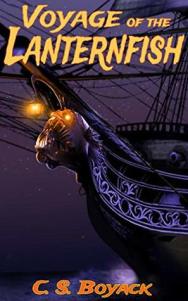 political scheme to start a war that will spread across multiple kingdoms. James Cuttler’s fiancé is being held captive to ensure he goes through with the plan.

He soon decides his skills are at sea and procures a ship to wage war upon those who disrupted his simple life. He can’t do it alone, so he recruits a band of cutthroats to help him. But first, they need guns and munitions to outfit the ship properly. Deception and trickery will only get them so far. Eventually, they’re going to have to engage the enemy.

James’ goals aren’t necessarily the same as his crew. It’s a delicate balancing act to collect enough loot to keep his crew happy, while guiding them back to rescue the girl.

Voyage of the Lanternfish is filled with adventure, magic, and monsters…