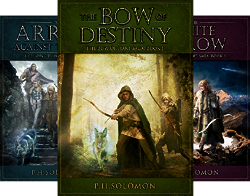 The Bow of Hart Saga

It’s been over a year since the last book of The Bow of Hart Saga was released and the last audiobook version launch just last week. I’m working on print editions to arrive soon too.

Over the last year, I’ve dictated drafts of the beginning books of four entirely new fantasy series and I’m currently working on some edits for those. I’m a bit up in the air about how those will be published, especially two of them that could go traditional, hybrid or self-published routes. I’m enjoying developing those new books very much though the progress has been much slower than I want. Those books should make an appearance this year depending on what happens and I’m looking forward to completing them as soon as I can. It’s nice to have a back-log of writing which I plan to start releasing as soon as I can so look for that publishing schedule over the next several months.

Lately, I’ve been toying with the ideas of a sequel to The Bow of Hart Saga. It’s all in the very raw, beginning stages and I don’t even know how many books it will involve – but it will be either a stand-alone book or a series of three books. It will be developed around Athson and Limbreth as readers can imagine. What exactly will happen? Well, I’m not saying just now but it will get interesting throughout the book(s).

One detail I know for sure, I will be developing a parallel novella series that I’ve already considered for over a year. Part of it is written and would entail some background to what’s to come based on a new character from another part of Denaria, far in the west, beyond the lands inhabited by the giants. I do know this little series will have plenty of adventure and a heavier role for giant characters. In the end, it will point toward the new series to wrap-up everything around Athson and Limbreth. My hope is to develop the entire series and release the editions close together as well as the one I’m considering about our star-crossed lovers.

That’s all I have for today. I’ll share more about all my writing developments as they progress. In the meantime, please follow me on Amazon, BookBub, Facebook and Goodreads. I’ve been working on private groups for fans on the latter two so contact me if you are interested. I plan to share more of what’s happening with new books in these locations. Contact me directly if you are interested in being a member where I’ll share some special information as books move toward publication.

Thanks for reading today and your interest in The Bow of Hart Saga. Just a reminder if you haven’t had time to read all of the series yet, An Arrow Against the Wind and The White Arrow, while all three are now available on Audible and Kindle Unlimited.