I’ve been sick for the last several days so I haven’t posted much during that time. I thought I’d go ahead and share a review 2017 and a look forward to 2018.

The year started well enough with The Bow of Destiny being named the 2016 Book of the Year by Fantasia Reviews. What a wonderful surprise that was, especially with my single novel. I was more determined than ever to publish the next book, An Arrow Against the Wind. I was also invited to join Story Empire which proved to be a lot of fun and a privilege to work with all the authors on that ongoing project.

But little did I know what the year had in store for me. By February 1st I was caught in a work-force reduction with my employer and found myself out of work. I thought it would be no trouble but I started work in earnest to complete An Arrow Against the Wind as soon as possible while I was out of work.

The job search stretched much further than I expected but I was highly motivated and released the book in late April. After that, I figured, as long as I still don’t have a job, I’ll work on the next one and see how far I get. So, I began work on The White Arrow – from scratch. Somehow, the job search just kept going but I finished the third book and released it in early October.

That made for a busy and exhausting writing year with a lot of stress about the job loss. Because of all the pressure to publish two books this year, I never had the time I needed to really set them up with releases that I felt good about. Money was limited and time was short so I made do with what I could do and still saw pretty good sales.

During all that, I ended up signing with a literary agent and started two new books, each the first book of a new series. Those two books are well underway and being pitched to publishers. I was thrilled to work with an agent and I’ve seen more writing opportunities as a result than I ever though possible.

This end of the year has rolled around much faster than I anticipated but it looks like I’ll be going back to work in just a few weeks (finally, though it’s temporary contract)! That will change my writing schedule but I’ll keep up the work on the books I’ve started and plan on one or two more. But The Bow of Hart Saga has been completed and I am moving onto new writing projects.

I have no idea what 2018 will bring considering how 2017 started. An Arrow Against the Wind has been nominated as Book of the Year again so it could very well start the year off very well. Some of my writing opportunities through my agent could come through or not. My new contract job might last all year or just a few months. After last year, I make no predictions about what will happen, nor do I place any big expectations on what I believe will happen.

I’m rolling up my sleeves to market the series more effectively as soon as possible. With more income, I’d like to release all the three of the novels in print and there might be opportunity with audio too. Otherwise, I’ll keep up the work on my new projects and see how far I get with them, hoping to release at least one book during the year. I’ll announce my print or audio plans as those develop as well as when I expect to publish anything new. Stay tuned, it should be an interesting ride if nothing else. I’ll soon share about some lessons learned in 2017 and finally get to a post about on of the settings for An Arrow Against the Wind. Until the, I hope everyone has had a Merry Christmas will have a Happy New Year! I’d also like to thank everyone who has read the books this year, I would be this far along without all the fans! 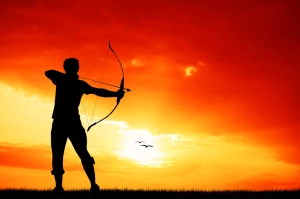 Photo used in The Bow of Destiny book trailer

Today, I’m giving a sneak-peek of tomorrow’s start to my Open-House event featuring digital autographs and lots of fun interaction here on Archer’s Aim. While you’re here, please take a few moments to share my Headtalker which will announce the event tomorrow morning across social media. It’s free and takes just a few clicks!

The White Arrow is progressing nicely at this point and it’s still my hope to release the book in late September (maybe the 20th).

There are always a number of details for book to be self-published and two of them are the cover and the book blurb. The cover is underway and about ready to be revealed. Check back tomorrow and you may get to see it during my weekend long digital autograph session.

However, the blurb is another matter and requires some thought. It’s always a trick with a book series to reveal what’s coming in the next book without ruining the books before it. Likewise, you have to be careful not to reveal too much about the upcoming book. I think it’s doubly true of the last book of a series – don’t reveal too much of the ending and risk ruining it for the readers. With that trepidation, here’s my rough draft of blurb for The White Arrow.

Haunted by his failure. Hunted for his inheritance. Seeking the fulfillment of prophecy.

Athson’s failures haunt him but he now has the object of his inheritance: the Bow of Hart. Though Magdronu and his servants are weakened, they still seek to thwart the Withling prophecy by taking the bow if they can find him. But they are aware of a powerful, unknown Withling who’s been assisting Athson and hunt him as well. Now Athson is missing in the wilds of the Troll Heaths after trying to save his father and Limbreth and his companions are looking for him. Though Corgren’s whereabouts are unknown, everyone is on edge. But there’s another facet to the prophecy: the promised arrow to be sent by Eloch. A sign has risen in the night sky foretelling the arrival of the arrow which is the doom of Magdronu. All involved are looking for the promised relic and what’s worse is the troll army standing in the way of Athson’s escape. Even if he wins free, Athson’s destiny awaits him with the coming of the white arrow and confrontation with Magdronu.

I’m still uncertain I’ve captured the essence of the book with this blurb. I offer it now for a bit of review and opinion but I’ll also rely on my editor for some solid input. This will likely change over the next few months but I’ve got something down and that helps to get the final version completed.

Thanks for reading today. Please leave your thoughts below in the comments and I’ll answer as soon as I can. Join me tomorrow for the beginning of my open-house event where I’ll offer digital autographs of my books among other activities. It runs all weekend!

It’s been a long time coming but the release day of An Arrow Against the Wind has finally arrived. The book has been promised for over a year and many readers have asked for more during that time. I’m happy and excited to announce the book is now available for purchase on all retail sites. 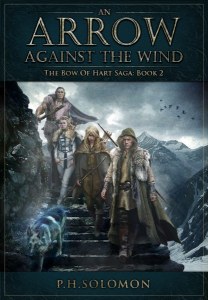 There are a number of recent appearances I’ve made that have been posted on the News page. Today was my turn on Story Empire so I shared A Video Ode to Book Revision which compares the sometimes arduous task of revision with some fantasy videos. There are also blog appearances today on Bound 2 Escape and The Book Town.

I’d like to think a few people for some recent contributions. Staci Troilo over on Story Empire provided this nice piece of artwork:

Silver Dagger Scriptorium had this nice tour artwork for both books:

Also, Margaret Daly over at Rukia Publishing came up with this cool visual for their post of the new book: 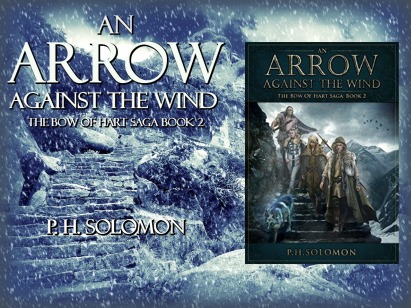 My thanks for these pieces. They are wonderful additions to the series artwork.

Next, I want to thank all the readers who’ve already started the series and are already into An Arrow Against the Wind. It’s a privilege to share this story and I’m thankful for everyone’s patience, support and well-wishes for the new release. So many people have been so kind along the way, it’s amazing.

In case you’ve missed the links for An Arrow Against the Wind, here they are: